Skoda Kodiaq India launch: What one can expect?

After bringing out Skoda Rapid Monte Carlo and Octavia RS, the Czech auto maker is about to launch its flagship, the 7-seater Kodiaq SUV in the Indian market. With this much-awaited model, the automaker is expected to make its official entry in the big-size SUV segment.

Skoda Auto has unveiled the Kodiaq SUV in Berlin, and now it is set to make its debut in India. With this new model, the automaker is going to offer a pool of features along with latest technologies. Hence, let us find out why this car is so highly anticipated and what you can expect in it. 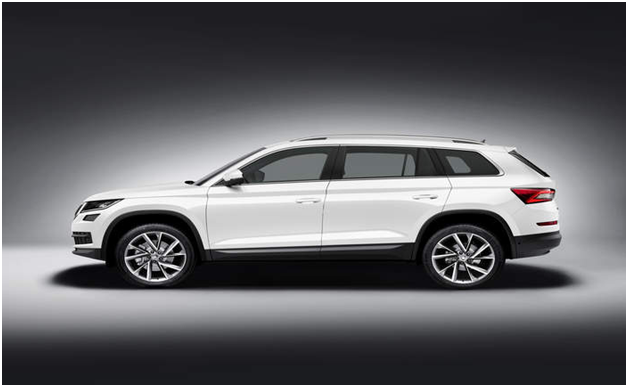 The Kodiaq SUV is going to incorporate the Skoda’s crystalline design language to add a premium appeal to it. The large SUV will be based on the VW Group’s modular MQB platform which also underpins the Superb and Octavia, as well as the Audi Q7.

The Skoda Kodiaq is intelligently designed. The front has the crystal glass inspired headlights with a three-dimensional attractive front grille. The LED tail lamps are also inspired by the design language, similar to other models of Skoda. The side profile has a sloping roofline and looks stylish. The C-shaped tail lamps add a very sleek and glamorous look. The rear end also looks sharp and sculpted. It has a 2,791 mm wheelbase and a ground clearance of 187 mm. The clamshell hood and sleek lines across the silhouette add a classy look to it. The bonnet also looks stylish and the fascia looks quite aggressive. It will run on Diamond cut alloy wheels.

The SUV gets a 270 litres boot space that can be extended to up to 630 litres by folding down the third-row seats. By folding down all the rear seats, the boot space can be expanded to 2,065 litres. It will get ABS and dual-airbags as standard safety features, while the higher variants are expected to get six airbags. It will also be equipped with four cameras to provide with a 360-degree external view.

The Indian-spec version will come with front-wheel drive for the basic variant. However, the higher variants will be available in an all-wheel drive option also. It will also get multi-functional steering wheel across the variants.

It will be powered by a 2.0-litre TDI turbo-diesel engine and a 1.4-litre TSI petrol engine. The diesel variant is expected to churn out 170bhp of power and 400Nm of peak torque. Despite the engine being smaller, it will result in a better speed because of it being lighter than the Fortuner or Endeavour. The engine will be paired with a six-speed manual and seven-speed Direct-shift gearbox automatic transmission. For different riding modes, it will be equipped with Dynamic Chassis Control. Other features include emergency auto braking with radar assist, adaptive cruise control at even higher speeds.

The upcoming Skoda Kodiaq is expected to be a crucial launch from the auto manufacturer as it is going to be the company’s testing phase of the SUV in the Indian auto-market. The Kodiaq is estimated to be launched between the price range of Rs 25 lakh to Rs 30 lakh (ex-showroom, Delhi). The pre-bookings for the SUV in India is about to commence soon.

The Kodiaq SUV is a perfect instance of great styling, performance excellence with amazing features on offer. Once launched, it is likely to compete with the likes of Ford Endeavour and Toyota Fortuner. Overall, it will a great option for you if you are looking for a feature-loaded SUV at an affordable price range.

The Skoda Kodiaq India will be manufactured at Skoda’s Aurangabad production plant in Maharashtra. The automaker is yet to make a final call about the inclusion of all the features in the Indian-spec model, subject to the permissions and regulations.

User rating: 0.00% ( 0
votes )
IBOCO – the Leader in the Field of Wire Management Get Linear Actuators Direct at Manufacturing Price